British social media sensation, artist, model and lover of everything bold and bright, Charlie Barker sits in the M·A·C Pro room upstairs at the Carnaby Street store in her pajamas, grinning, messy orange hair falling around her face.

Having not given much thought to how she might look at the end of the night – other than Halloween-ready – she and her model pals are sharing sweets and champagne, getting their eyebrows bleached and flicking through their phones for “inspo.” Culture sat down with Charlie (and her best friend Patrick) to find out what life’s like when you’re 19 and have half a million Instagram followers…

What makeup are you having done?
Charlie: I’ve no idea! I want to be a clown – but not a scary clown – a pretty clown. There’s no mood board for it, it’s all in my head. White face, drawn-on eyelashes, pink cheeks, over-the-top lipstick… 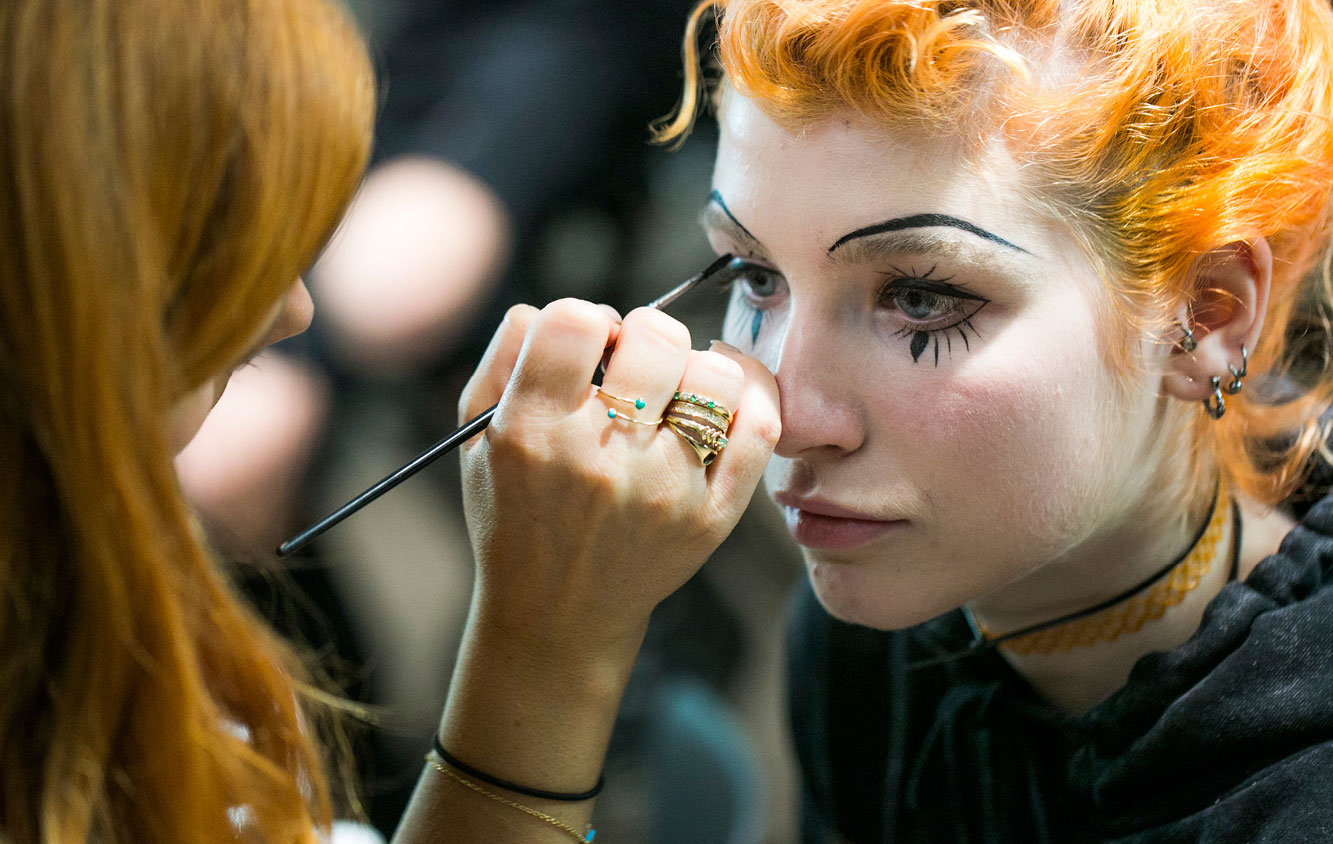 So, like a 70s clown doll…
C: Yes, the scary factor comes from my personality – just me with an excuse to be scary! I’ve not planned any outfit; I’ve left this to the last minute. Last year, I started planning a month in advance. I was Hit-Girl. The year before I was Maleficent. I made these huge horns and did the makeup on point!

Do you usually do your own makeup?
C: Yes, I like experimenting with it. My go-to extreme, but also comfortable, look is pink eye shadow, always. But then I dyed my hair orange and pink with a lot of mascara. I recreated one of David Bowie’s looks…

“My go-to extreme, but also comfortable, look is pink eye shadow, always. But then I dyed my hair orange and pink with a lot of mascara. I recreated one of David Bowie’s looks…” – Charlie Barker

Which one?
C: The Goblin King from Labyrinth! It was just for going out. I did Gaga’s ARTPOP on Instagram. I’ve done quite a few of Gaga’s looks. I think she’s grown out of many of those now – I feel like I relate to her being over it.

Who else do you look to?
C: Not so much people, but I always look for pictures on the web and think, “Oh, I can do my version of that.” I usually get my pictures from Tumblr. 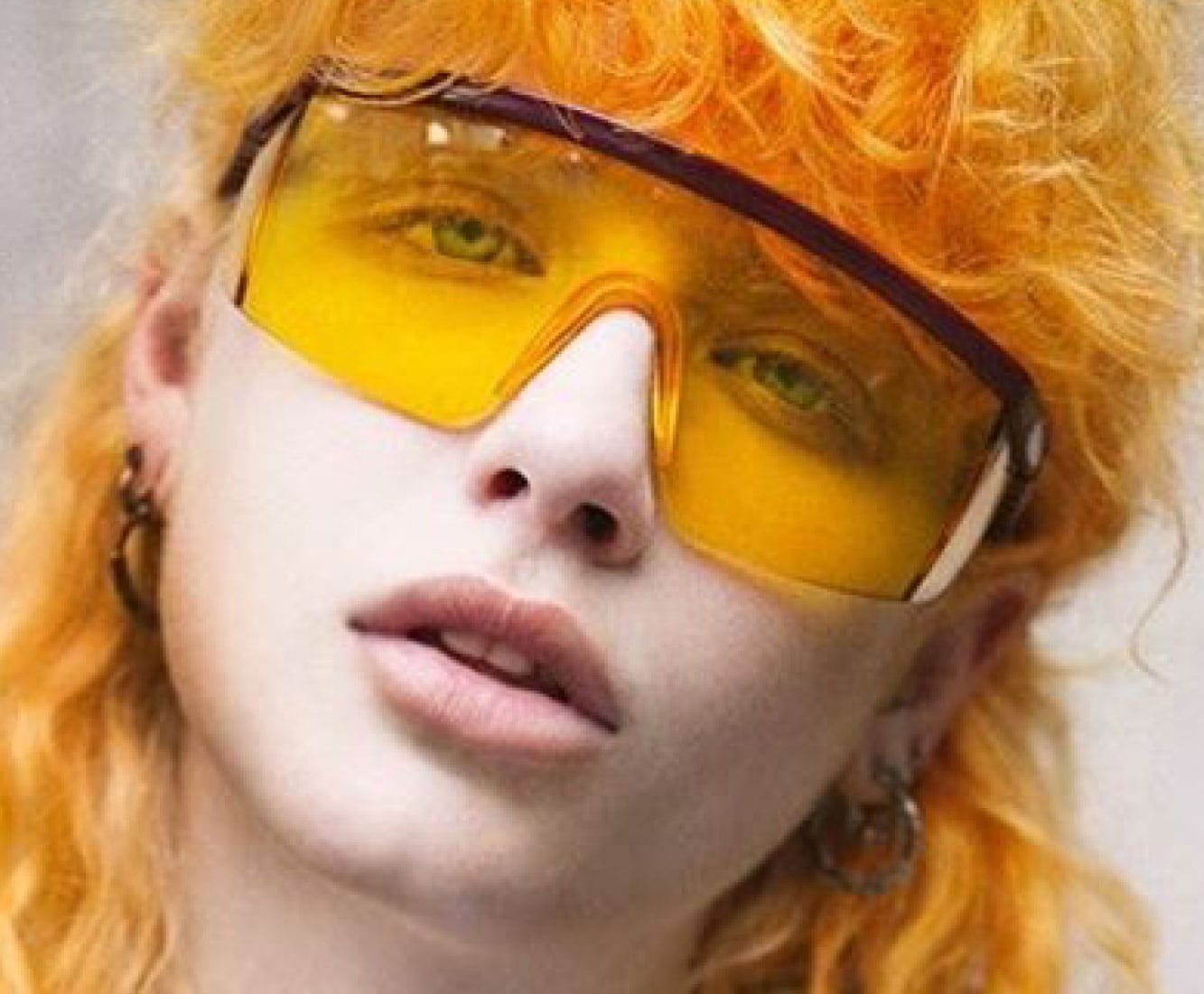 Patrick, what about you, what do you want to be tonight?
P: I just want to look good. I don’t want something that’s too much…I don’t personally feel like wearing a lot of makeup is necessary – I like to curl my eyelashes and wear clear mascara.
C: You used to wear makeup.
P: I used to dress up as a woman; I looked really good. She was called Trish. She was a messy girl. Now I’m stripped back, back to Pat. From Trish to Pat.

How did you two meet?
C: I did a shoot with his best friend. Eventually, we adopted each other. We lived together for a bit in my student accommodation.
P: That’s a test, in one of those bedsits. It was a good few months. Then, I moved into a house of drag queens and Trish was born.
C: Trish was wild and had her own thing going on. I learned from her.

What is it like when you go out now?
C: People get weirded out when I go to something formal and I have crazy makeup on. I’m like, “Oops! Wrong event.”
P: We went to a party the other night in double denim and everyone else was wearing suits. We don’t really care what people think.
C: You learn to not take it in, because if you decide to be different people will react every single time. When did you dye your hair orange?
C: I did it when Bowie died. Usually I change my colour every single week, so ten months is quite a long time for me. It’s been all shades of orange, though. I started bleaching it when I was 16.

What about your eyebrows?
C: I used to have them bleached for three years…You have to bleach them all the time, otherwise you get roots and it looks so weird.

Other than hair maintenance, what’s your average day like?
C: Usually, I’m studying Fine Art at the University of East London. But I just bought a boat to live on, so I’ve been doing really adult stuff! It’s in Hackney at the moment; I just moved it there two days ago. I’ve had a lot of work – shoots – after fashion week I felt so in demand by my agency Select Models. I did a few shows, both walking and watching, and going to events, working and travelling, and then a load of shoots…Who knew being sociable was so tiring!?