Kristin Kontrol is the latest incarnation of singer-songwriter Kristin Welchez, who, til now, was beloved as “Dee Dee Penny” of Dum Dum Girls, a self-propelled, goth-tinged rock band with impeccable taste in noir attire. Now, at the helm of her new synth-spiked project, with a big, bright pop album in tow, she’s switching gears stylistically and, fittingly, has never been more in control. On the road now with her childhood idols Garbage – the pioneering electro-rock band with VIVA GLAM icon Shirley Manson at its helm –Kristin talks about the liberation of new beginnings, the perks and perils of being a goth in hot weather, and how female camaraderie has driven her to new heights.

How did you know it was time for a fresh start as Kristin Kontrol?
I had hit the ceiling. I had taken Dum Dum Girls as far as it could go. I felt that if I kept trying to expand on my aesthetic or my sound but kept releasing it under that name, it was going to be shortchanged or miscontextualized. I found that really frustrating, so I knew I was going to make a record that didn’t have any limitations attached to it. I probably went overboard in that, in a making up for lost time kind of way. So, I brought in new people – I’m not going anywhere; the other variables have to change! I decided I wasn’t going to write on guitar because it’s my comfort area; I was really going to embrace my full vocal range. I started writing on keyboard and playing with sounds that were very unfamiliar to me; I didn’t really have the dexterity with that instrument that I’m used to, but there’s a charming thing that happens when you don’t really know what you’re doing. You stumble onto something kinda special.

What were some of the challenges in embracing that beginner mindset?
What I was writing wasn’t up to the standard I’ve set for myself. I had tunnel vision – it was so new that I’d get really excited about a couple of songs and get feedback like “Yeah, that’s kind of interesting” and I’d be like “Really? Shit, OK, cool.” Sent more, same response. It got really frustrating. I didn’t know how not to keep doing the same thing. I definitely had an overwhelming day where I thought I’d lost my ability to write songs. It was scary. Then I saw Perfume Genius live that week and his transformation really captivated me; his set was just so minimal and lean but so well executed. It resonated with me; I felt re-inspired. After I saw that show, I went to my friend’s house the next day and ended up writing the song that became the first song to make the record. It was a giant sigh of a relief.

How did you approach the live visualization of this new era?
When I began to conceptualize the live show, I knew I had really strong players who could play the material perfectly; the amount of rehearsals we had was more than enough to solidify as a really tight band. There was really nothing left to focus on but my own performance. I was little nervous that I was going to have a hard time occupying the space in the way I wanted to. I grew up as a pretty serious dancer; I stopped when I traded it in for rock ‘n’ roll or whatever. [Laughs.] I know that I can dance, but it was a dormant part of me for so long that I knew that I couldn’t just go out and wing it. I reached out to choreographer Juri Onuki, who has worked with FLUCT and Dev Hynes, and she put together some modern, linear, minimal routines for some of the dancier numbers. Some ballet, a little vogue-ing, a little hip-hop – it just works. I feel like I’m pretending to be Robyn’s little sister or something, which is my ideal anyway!

“People are going to associate Kristin Kontrol with what the album cover looks like. But I wasn’t trying to establish a template – I have no idea what the next thing I’m going to do is. I’m very much taking a chapter out of the Bowie book of just going through phases as you enjoy them.”  – KRISTIN KONTROL

How did this latest tour with Garbage, your first as Kristin Kontrol, come together?
I have a bit of a relationship with Shirley; we became Internet friends because I apologized to her on Twitter for stealing her cab! It was one of those funny New York incidents; I was running around doing press and she was probably doing the same, and my A&R guy totally stole the cab she was hailing.  I realized it was her and was mortified. I decided to take advantage of how direct you can be on Twitter and apologized, and then we kept in touch. I also reached out to her a little bit when I was trying to figure out what my next move was. Which was great. She was my first ever concert! That was really my first a-ha moment of how do I do this?

What are the benefits of having a mentor like Shirley?
Starting a new project, nobody knows what to expect live; nobody knows what the show is going to be like. To be able to ride their shirttails and play a really big stage – but not TOO big – to 800 to 2,000 people without our neck on the line has been a really good thing.  Musically, it makes a lot of sense. The nostalgic factor was important for me, too, and it feels like an endorsement to be able to play with them – a good place to be starting out.  The band is one part Midwestern warmth meets one part boisterous Scottish inclusiveness: it’s a good recipe. There’s been so much support and enthusiasm that I think it’s factoring into my own confidence. There’s no fear – just fun. Shirley is loved for who she is, which also creates an atmosphere for others to open up. Also, I have insider info on the Garbage audience, because I am one of them! They are my own people, and I have my own version of strength to show them, too.

What else did you discover about confidence through movement?
Beyond dance, it was about reconnecting with my body. How I hold myself, how I move throughout my regular day. Juri spent 20 minutes just analyzing my posture. I’ve done yoga and Pilates for years, but there’s something that has happened in the last five or six years where my shoulders have so much tension and became kind of rounded forward. Seeing my alignment and how I walk across stage was like an act of power. I worked with her for a few weeks, and felt really stupid and self-conscious for most of it. Then on our last rehearsal, it all clicked, and I was like “OK, I got this.” Stand like a ballerina and that’s how you look confident!

Your overall taste in fashion seems to have really opened up, too. You used to be known for all-black-everything!
People are going to associate Kristin Kontrol with what the album cover looks like. But I wasn’t trying to establish a template – I have no idea what the next thing I’m going to do is. I’m very much taking a chapter out of the Bowie book of just going through phases as you enjoy them. I’m not tied to anything except not falling back into the goth-femme mode that people once knew. I’m trying to bring in more colour, just a glammier vibe. I had an artist make a couple of silver lamé outfits for me that have been fun. I brought my latex pants because I wore them on the cover and sometimes you just don’t what else to do. Might as well pop on latex! My hair has grown out a lot since the Dum Dum time. I change it up more than I used to. It’s also really fucking hot, so it’s been up a lot! Otherwise, it’s like I have a fur hat on. 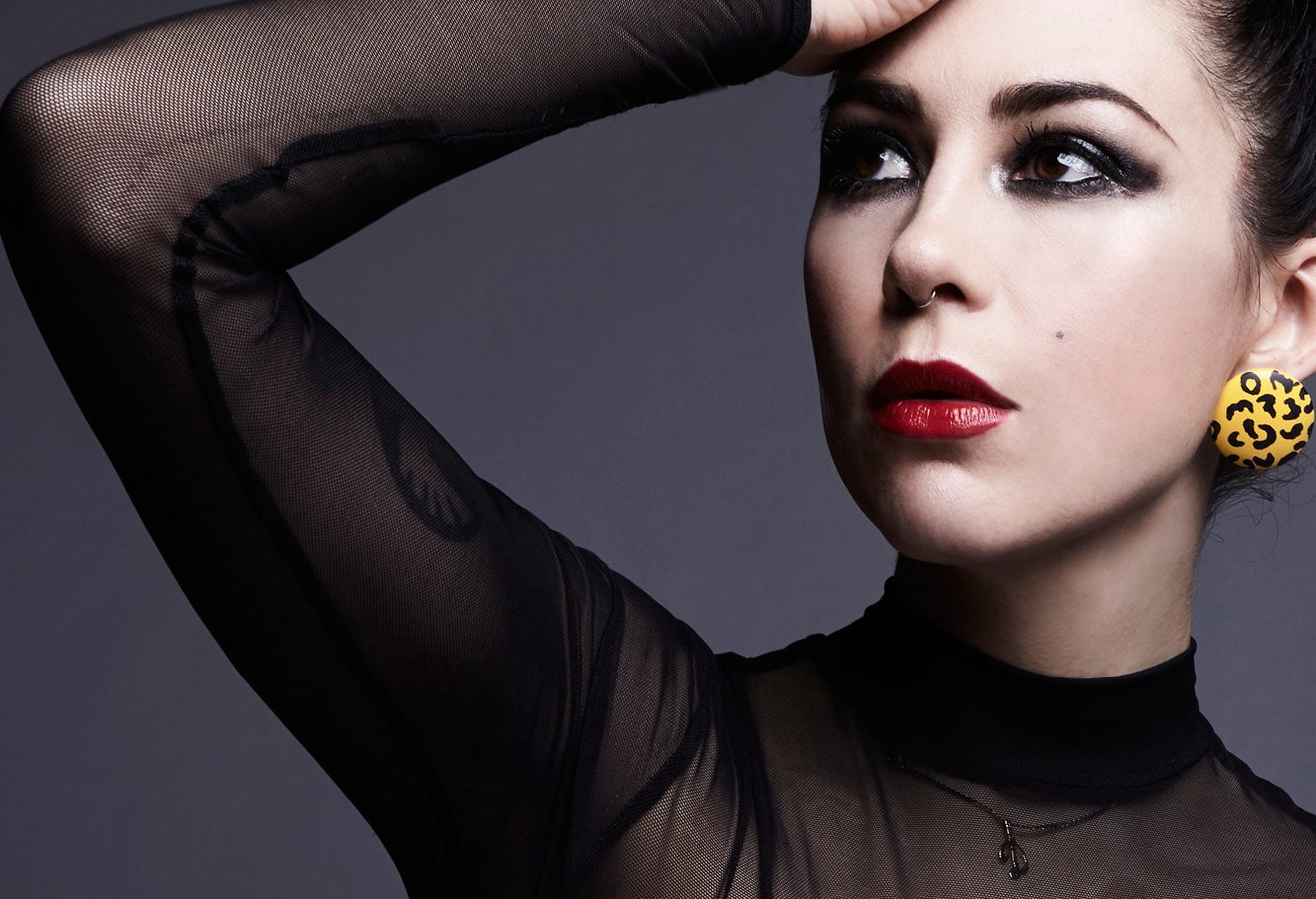 “I just went to the beach, and let myself tan. I immediately went like, five shades darker. So, I go to M·A·C and I explain my predicament. “Well, I was a goth for a really long time, and I still am, BUT I let myself tan a bit and I feel good and healthy.” They recommended Blot Powder and I’ve been using it ever since. But they handed it to me and it’s like Medium Dark or something. My mind exploded.” – KRISTIN KONTROL

What about makeup?
This is actually funny. My dad got married in Hawaii this past Halloween, so I was there for a while. Now, I’ve worked really hard to maintain a super-fair complexion for the past 20 years. I’m naturally much, much darker. So, in Hawaii, I’m mixing, the record is almost done; I’m about to make all these massive changes, and I’m starting to feel the relief of change, and I just decide that I am going to stop fighting my natural colouring! I just went to the beach, and let myself tan. I immediately went like, five shades darker. On the flight back from Hawaii, I have to get some makeup, so I go to M·A·C and I explain my predicament. “Well, I was a goth for a really long time, and I still am, BUT I let myself tan a bit and I feel good and healthy.” They recommended Blot Powder and I’ve been using it ever since. But they handed it to me and it’s like Medium Dark or something. My mind exploded. On the plus side, there’s a whole palette of colours I would have stayed away from because they would have washed me out, but now I can wear them!